How does Monaco act in favour of bluefin tuna?

Since 2008 and under the impetus of H.S.H. Prince Albert II of Monaco and his Foundation, the Principality of Monaco has been mobilising its forces to alert world opinion and attempt to safeguard this great migratory bird emblematic of the Mediterranean.


Bluefin tuna is so powerful, yet so vulnerable to the financial interests it generates. Since its creation, the Prince Albert II of Monaco Foundation has worked to safeguard the species and made Monaco the first State to request international protection for this species. Thanks to the Principality's political action and the worldwide repercussion it has had, the quotas proposed by the scientists have been respected and the stocks have begun to consolidate. This emblematic fish of the Mediterranean is therefore representative of the power of Man to regulate fisheries to ensure a sustainable stock and the survival of a species. Although the situation of bluefin tuna seems to be just beginning to recover in the Mediterranean, the species is still vulnerable. It is therefore essential to remain cautious and vigilant, to combat illegal fishing, and to ensure that the advice of scientists is always followed, even if it differs from economic interests. The "fight" is never won and the memory of Man fades in front of the gain, we must continue our efforts so that this lord of the ocean continues to populate our beautiful Mediterranean.

A moratorium to set an example

In 2008, a moratorium on the consumption of bluefin tuna from the Eastern Atlantic and the Mediterranean, initiated by the
Prince Albert II Foundation


and the Monaco Sustainable Development Association (MC2D), was set up in the Principality, in collaboration with restaurants, retailers and supermarkets. Thanks to this totally unprecedented national consensus, the Principality is setting an example; bluefin tuna is no longer offered for sale in Monaco, including in sushi restaurants!

In 2009, at the 15At the session of the Conference of the Parties in Doha (Qatar) in March 2010, the Principality (together with France) launched a procedure for listing in Appendix I of CITES which, if adopted, would have had the effect of banning international trade in bluefin tuna.Eastern Atlantic and Mediterranean. Although not adopted, the proposal raised awareness of the world public opinion far beyond the borders of Monaco and contributed to the decision of ICCAT to reduce fishing quotas.

From 2011 to 2019, Monaco shall suspend catches (professional and recreational fishing) in waters under national jurisdiction.

From science to consumer awareness...

Since 2008, in partnership with the WWF, The Prince Albert II Foundation supports numerous programmes aimed at the sustainable and long-term management of populations (and no longer at the temporary replenishment of stocks) by following several lines of work: understanding the movements and behaviour of this great migratory species in order to have a better knowledge of stocks and to define reasonable quotas, preserving reproduction areas (spawning grounds) thanks to sanctuaries in the high seas or other marine protected areas, fighting against illegal fishing, developing responsible fishing techniques and consumption habits (thanks to Mr.Goodfish ), favour artisanal and local fishing.

in the sanctuary
Pelagos
an area where very little data exists. The data are transmitted to ICCAT and contribute to the estimation of stocks and the determination of quotas to ensure a sustainable bluefin tuna fishery.

Echoing the actions of its partners in the Principality, the Oceanographic Institute uses the example of bluefin tuna to inform and mobilize the general public about the challenges of global fishing and the disappearance of large marine predators. Professor François Doumenge, an eminent bluefin tuna specialist and director of the Oceanographic Museum from 1989 to 2001, has published numerous scientific and popular works on the subject, including “
The history of tuna fisheries
“in 1998. The subject is the subject of conferences such as “Bluefin Tuna: History of Overfishing and Recovery”. 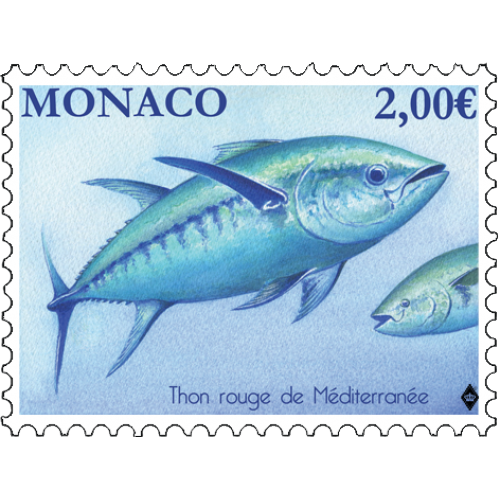